I offer you insincere apologies if the title of this post made you groan! I love a pun and this one is my reward after a long wait to get a good taste of patience dock (Rumex patientia, also known as herb patience, garden patience and monk's rhubarb). I recorded my tribulations with trying to grow this plant here.

But this spring it is looking good and strong.... 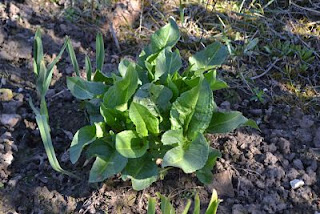 It was beautifully fresh tasting and truly mild (I'd been expecting just a mild-compared-to your-average-pernicious-weed sort of mildness). It was also very slightly lemony but much less sharp than sorrel.

Like Good King Henry it's another forgotten pot-herb that would be worth remembering. But I'm far from the first to make that plea - this is Patrick Neill in 1817 in his An Account of British Horticulture. Drawn up for the Edinburgh Encyclopaedia.


"In old times, garden patience was much cultivated as a spinach. It is now very much neglected, partly perhaps on account of the proper mode of using it not being generally known. The leaves rise early in the spring; they are to be cut while tender, and about a fourth part of common sorrel is to be mixed with them. In this way patience-dock is much used in Sweden, as we have been informed by the late Sir Alexander Seton of Preston, who had an estate in Sweden, and frequently resided there. This mixture may be safely recommended as forming an excellent spinach dish. Garden patience is easily raised from seed, which may be sown in lines, in the manner of common spinach, or white beet. If they be regularly cut over two or three times in the season, they continue in a healthy productive state for several years."

The leaves are said to become quite bitter later in the year but I should imagine that chopping them down so they produce new young foliage is a way of avoiding the bitterness. I'll be trying it anyway. Left to flower, patience dock grows tall, to five feet with ease and in rich soil can get to over eight feet. Removing flower stems before seed is dispersed is worth doing to avoid it springing up all over the garden.

I took some patience dock home to steam it. 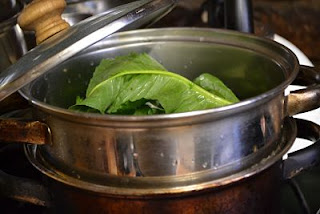 Removing the midribs from the leaves isn't necessary. I left the midrib on one large leaf and discovered that it cooked almost as quickly as the rest of the leaf i.e. in about three or four minutes. 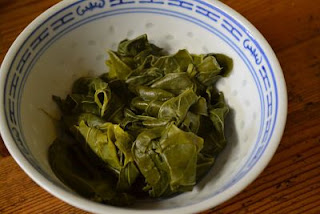 The texture was pleasingly soft; I can see why it is said to make an excellent purée, but it does need some extra flavour - salt, pepper, chilli, ginger, sorrel maybe.

I think I'll be mostly adding it to salads though. It will be useful to be able to gather large mild leaves produced in abundance. There are plenty of small fiddly salad leaves for the picking at this time of year - they need some patience!

N.B. I have some patience dock plants for sale at the moment.
N.B. I sell a range of perennial vegetable plants on my website.