It's March again and the two year anniversary for this blog - so it's time for another review of my perennial vegetable garden experiment. I'm a bit of a mad March hare at the moment - on a definite high about the arrival of spring and my gardening plans for this year! 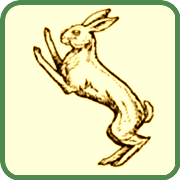 Last year I was busy moving plants from one of my two allotments to the other one as part of my aim to devote one plot to perennial vegetables and fruits. I had decided to grow one vegetable in each of the twelve beds (or one in each half-bed) and choose a ground-cover (preferable an edible one) to grow beneath the plants to prevent weed growth.


This year I want to move towards vegetable 'polycultures'. I've been getting just one harvest from most beds at a certain period each year - perennial vegetables can be as seasonal as annual ones - it's just that they stay around to deliver again at the same time in following years. My original one food crop + a low-growing ground-cover strategy evolved out of a desire to keep things neat and avoid cross letters from the town council - but I'm glad to say it is a few years now since one of those has arrived! So I'm planning to group vegetables which will live happily together in one bed (e.g. one won't deprive the other of light or nutrients) and complement each other in terms of their harvest periods. I'm still working on this, but for starters I think sorrel and sea beet might fit in well with Babington leeks and a selection of low-growing alliums could grow beneath the tall stems of some of the perennial kales.


Consolidating the beds in this way will also free up a bit of space for a new venture. I'm excited to be getting involved in two selective breeding projects this year along with other edible plant enthusiasts. These are aimed at coming up with a skirret with fatter roots and an oca that will form tubers earlier in the year (to get involved visit The Free Skirreteers on Facebook and The Guild of Oca Breeders webpage). I'll need some space for growing on oca and skirret seedlings so they can be assessed for desirable qualities!

I feel I still need to go for a 'tidy look' on most of the plot. (For those who want a wholesale polyculture approach, Anni Kelsey's book, "Edible Perennial Gardening: Growing Successful Polycultures in Small Spaces" is a good guide.) But there is more of a mix in the herb garden where I also grow some perennial vegetables.


I had some difficulties with this area last year, with some usually vigorous plants such as patience dock, lovage and horse radish refusing to do much growing. So I've been busy this spring taking out the plants, digging it all over, incorporating compost and replanting.

To the right of this area is another herb garden of the same size which surrounds a pond. The pond is an unfinished project which has always slipped out of my control up until now. Couch grass and creeping buttercups grew around its perimeter and invaded the carpet which I had put on top of the pondliner in order to protect it. The carpet has now been pulled out (and the weeds with it) and the surrounding beds are getting the same digging and replanting treatment as the first herb garden area. I plan to grow both edible and wild-life friendly plants in the pond. I'm also creating a small wetland area.


It's the rectangular area at the back of the photo above. I've dug out a patch of soil to a depth of 35cm, lined it with some punctured compost bags and replaced the soil mixed with some sand and gravel.  Amongst the plants I'm going to try in here will be Chinese artichokes (Stachys affinis) which produced almost no tubers in the dry summer we had here last year, alongside the related marsh woundwort (Stachys palustris).

I still need to find a way of protecting tall kales from pigeons in the winter. After their attacks in early winter I replaced the fine summer netting which had kept out the butterflies - but the winter winds played havoc with it. I'm playing with the idea of rooting willow wands and attaching wide gauge bird netting to them to make a walk-in cage affair - something I can go inside to harvest easily and which the wind can whistle through without encountering much resistance. Perennial kales have a good ability to recover from pigeon attacks though. Here is a variegated Daubenton, which was heavily nibbled in early winter, showing a flush of spring leaves.


Whilst the Asturian cabbage, the massive 'Tall' kale, the Portuguese kale (my favourite perennial brassica last year) and the Jersey kale have also all survived the winter, the wild cabbages haven't fared so well. I began with five plants which all came through their first winter but two died after flowering the following spring. Of the three remaining plants two have now died and I am just left with one, luckily a bluey-green one that I particularly liked.


Brassicas are generally easy to root from cuttings and I'm beginning to realise that this is sometimes a better way to keep special types going from year to year if they prove to be unreliable as perennials.

Finally I ought to report on the Bath asparagus which featured in my first blog post in 2013 and which didn't flower that year. No it didn't flower last year either.....This year perhaps?.....


N.B. I sell a range of perennial vegetable plants on my website.