'Jade Pearls and Alien Eyeballs' to read (and to eat!) 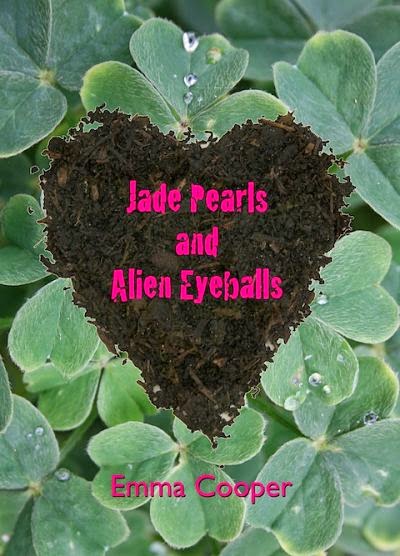 Emma's book is about unusual edibles. Jade pearls and alien eyeballs are both common names for edible plants and as she sent me a preview of the book I know which ones they refer to! In fact the whole book provides a rich and appetizing seam of references to unusual edible plants alongside engaging stories of people who seek them out and grow them.

Kitted out with pith helmet and magnifier, Emma is on a virtual book tour this month and she is visiting The Backyard Larder Blog today. So I asked her some questions about her views on the possibilities/limitations of perennial vegetable gardening.

Welcome Emma! In the course of researching for your book did you get any idea of the proportion of gardeners who are growing something you'd call an unusual edible?
Not really. On the one hand, it’s clear that unusual edibles are still unusual, and that the majority of gardeners are happy growing their favourite vegetables and reliable varieties. But it is sometimes surprising how willing people are to give something new a go once they’ve learned a little bit about it.
Would you say that seeking out unusual edibles to grow is becoming more popular in recent years?


Recent books by Mark Diacono (A Taste of the Unexpected) and James Wong (Homegrown Revolution) have certainly given unusual edibles some more mainstream attention, although it’s not clear how long that will last. Research shows that the majority of allotment gardeners use commercial sources for their seeds, so it’s encouraging to see some of the big seed companies adding more unusual edibles to their range and making them more widely available.
Can you tell us about particular edibles that were unusual, say, 20 years ago but are now quite commonly found on allotments and in gardens?
There’s been a real resurgence in salad leaves. It all started with Joy Larkcom and her ‘saladini’, which she brought back from her tour of Europe, but I don’t think anyone could have predicted 20 years ago that rocket would become so ubiquitous in kitchen gardens. The market for chilli pepper seeds and plants has really heated up in the last few years, as well – they’re very trendy at the moment.

What do you think it takes for a food to make the leap from 'unusual' to 'common'?
That’s actually quite a complicated question to answer. I looked at that as part of the research for my Masters degree, and there’s a lot of factors that are involved when people choose what to eat. Foods can be adopted very quickly into the diet – which seems to have happened with chilli peppers for example – or completely overlooked. Here in the UK I think we’re currently going through a period where many people are open to trying new foods, and that’s a big part of the battle. But for something to really become common then of course it has to be affordable to most people, and the supply lines have to be there. In terms of unusual edible plants then for them to catch on with gardeners the seeds have to be readily available, and the plants have to grow well in our climate – and for many species that means some breeding work is needed.

Was there anything you discovered which particularly surprised or impressed you whilst researching for the book?
All of the people in the book, and in fact all of the people I have encountered on my unusual edibles journey, are really committed to sharing their knowledge of these plants and helping to make them more popular. Everyone is so willing to help if you have a query, it’s a really welcoming community. Even amongst gardeners, who are lovely people in their own right, people with an interest in unusual edibles stand out.

Your book covers both annual and perennial edible plants of course but, as a gardener yourself, would you say there is less work involved in growing perennial rather than annual plants - or other advantages? How about disadvantages?
I don’t think there’s less work involved in growing perennial plants particularly, but what you find is that the work is spread out across the year. With annuals there’s a huge race to sow seeds and get plants into the ground in spring, and then you’re hard pressed to keep up with the harvest in late summer. With perennials the work is more evenly spread out. That can also be a disadvantage, as it means you have to remember when you’re supposed to be tending to a particular plant; it’s easy to miss your harvest! Gardening media is very much geared to a traditional garden with mostly annual plants, and if you want to include a lot of perennials then you have to work out your own timetable – but once you do you have a good spread of crops throughout the year.

I've often wondered about the familiarity, or otherwise, of names for perennial vegetables. Do you think people are more likely to try Caucasian spinach for example, because 'spinach' is familiar as a vegetable name, but less likely to eat say musk mallow or day lily?
That’s a factor that came up in my research. Historically cultures have found it easier to accept new crops that they understood. Once of the reasons the potato struggled in Europe was because there wasn’t a tradition of using tubers. The chilli may well have been accepted everywhere it went because it was recognised as a spice. Marketers use this tactic now – oca is described as being very similar to potatoes. I’m not entirely sure it’s helpful, as they are quite different, but there’s a need for unfamiliar things to be explained in familiar terms. But I don’t think that goes any way to explaining why so many plants are unlucky enough to have ‘bastard’ in their name.

Of the perennial vegetables you have become familiar with, which do you think has the most to offer the amateur vegetable grower?
I think it’s definitely time for a sea kale revival. It was popular in Victorian times, but has fallen out of favour. It’s easy to grow, and familiar enough to be accepted, whilst being different enough to add novelty to the garden and people’s diets. That doesn’t mean we have to grow or eat it in Victorian ways; in Charles Dowding’s new book – Gardening Myths and Misconceptions – he says that he’s stopped forcing his sea kale plants. Not only is it a chore, but it weakens the plants. He now harvests young, green leaves instead and finds that they’re delicious and that the plant is more productive.

In your book you talk about how concern about the planet is a major motivation for people to grow unusual edibles and you explain the thinking behind this. Are you optimistic that growing such plants might be part of a broader, long-lasting shift towards 'greener' methods for growing food in this country?
I was reading an article recently about a farm in Nebraska that was responding to drought by diversifying into grapes, as they use far less water. Here in the UK the media coverage of the floods we’ve suffered this winter has put some of the blame on our current farming practices. My personal feeling is that agriculture will adapt to changing conditions – but only when it’s forced to. If gardeners have already shown that unusual edibles can grow well in this country, and there’s a demand for them, then that might be a way to get change happening a bit more quickly.

Do you have a personal favourite unusual edible (of whatever sort)?
I have a soft spot for achocha, partly because it was one of the earliest unusual edibles I grew, and partly because it’s such an easy plant. Sow the seeds around the same time as you’d do your French or runner beans, and you’ll quickly have a climbing plant that will scramble over its support, the shed, the washing line and even the dog if it stands still too long! It has beautiful leaves, and although the flowers are small they attract hoverflies and other beneficial insects. And then, one morning, you’ll notice a small army of fruits hiding among the foliage. You’ll be picking them all summer without making a dent, and it’s beyond easy to save your own seeds for next year.


Sliding down the scale of unusualness a bit, if people are looking for something a bit different but still familiar then there are some lovely courgettes and summer squash you can grow. Rugosa friulana is a yellow courgette with bumpy skin – it looks very ugly, but tastes wonderful and has firmer flesh than a traditional courgette. And the little patty pan squashes that look like flying saucers are wonderful, too.
Thanks Emma - your answers (and your book!) have given me a really useful broad view of the world of unusual edibles.

For details on buying 'Jade Pearls and Alien Eyeballs' go to the book's homepage.


N.B. I sell a range of perennial vegetable plants on my website.