I was growing Jerusalem artichokes for a few years before I became engrossed with growing perennial vegetables generally. Despite having a very imprecise memory for dates I know this because my elder son wrote a poem about them shortly after we moved to East Yorkshire in 2002 when he was about eight - and I can track my perennial vegetable journey by posts I wrote on the Permaculture UK forum. I've just asked my son if I can use his poem in my blog post and the answer was yes but he wants credit! So here we are: 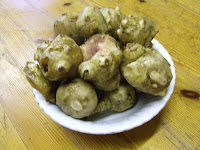 Artichokes are knobbly
Artichokes are pink
Artichokes are yellowy
and they really make you stink.
All of which is true - at least some of the time. Not all varieties are knobbly, pink or yellowy (the variety Fuseau is white and smooth) and some people happily eat Jerusalem artichokes without passing "filthy loathsome stinking wind" in the ever quotable words of John Goodyer (Goodyer was a botanist from Hampshire in the 17th century who introduced the Jerusalem artichoke to England - but then found he didn't like them).

There are a stack of tips for avoiding the flatulent effects of the artichoke and I should get quickly to why they are worth growing before anyone is completely put off.
Artichokes are incredibly easy to grow! You just plant them 12" apart in a sunny location where they won't shade other crops and harvest them from October onwards leaving a few well-spaced tubers to regrow the following season. Their tubers are rather like potatoes to eat with a nutty, slightly smoky flavour. They are best known for making a delicious soup and can also be used in stews, curries and stir-fries and also roasted or grated into salads. You can eat the blanched shoots (a discovery made by Rhizowen and detailed on his blog here). They also make great chips.
So if you discover (as I have done) you cannot eat Jerusalem artichokes to your heart's content without suffering afterwards you might like to try the following:
1. Eat them in just very small quantities and frequently until your system gets used to them.
2. Parboil the tubers first and throw away the cooking water.
3. Cook them with herbs or spices which are helpful to digestion (sage, thyme, garlic, fennel, dill, winter savory, caraway, cardamon, cloves, cinnamon and others all appear on lists of recommended ingredients).
4. Cook them for a long time so that some of the inulin (the problematic carbohydrate that the tubers contain) is converted to fructose which is more easily digested. A friend of mine swears by slow roasting them - I've also read that a pressure cooker can be used. (I'm guessing the idea is that using the pressure cooker for a normal cooking time equates to slow cooking).
5. Don't harvest them until late winter/early spring when some of the inulin will have been changed to sugar.
I tried the last suggestion recently when I made some artichoke soup for myself and a friend. The tubers were certainly sweet but I had two big bowls of the soup and yes I did feel the effects. From my reading the really crucial thing to do is the first suggestion, the slow, gradual introduction. Many people report that wind was only a problem when they first introduced the artichoke to their diet. I'm going to try this. My husband, Stew, really suffered from eating his first artichokes, as some people do, and can't face them again, but a batch of artichoke soup in the freezer will be great for when I'm having lunch alone.
The soup was delicious (very simply made by gently frying an onion in olive oil, adding a couple of chopped garlic cloves and 500g of artichokes and cooking for a few more minutes, and then simering in 800ml of vegetable stock until tender and seasoning with salt and pepper. I also picked a bunch of chives to chop for a garnish but then forgot to use them - would have made a nice addition).
Yesterday I made some artichoke chips (just scrubbed, cut into portions and shallow-fired in olive oil) and served them with a zesty sorrel sauce which I made by blending 50g fresh, uncooked sorrel leaves with 200ml yoghurt, 2tblsp olive oil, a couple of garlic cloves and salt and pepper. It would have been better with a thicker yoghurt but this was Easter Sunday and I just bought what our local Costcutter had on offer! You can make this with double cream or creme fraiche too. Some recipes call for 'melting' the sorrel in butter first which gives a less astringent result but a muddy colour - I loved the sharp taste of the uncooked sorrel with the sweetish, smoky flavour of the chips.

N.B. I sell a range of perennial vegetable plants on my website.